The Blindfolded Leading the Blind 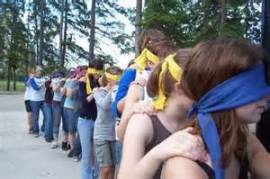 In reaction to the suggestion that he actually learn something about the subject on which he presumes to justify a total rejection, he simply demands that he needn’t learn “fairyology” to know that fairies don’t exist. But, presumably, one first needs to know what fairies are before one can make that call.

And that is precisely what theists keep trying to explain to Dawkins–that he fundamentally misunderstands what the word “God” means.

But Dawkins isn’t hurting for people to rush to his defense. I’ve heard many people claim that there is no such thing as the New Atheists. But, whatever we’re calling them, there is a large group of self-identified atheists out there who agree that Dawkins doesn’t have to know what he’s talking about in order to know that he’s “almost certainly” correct.

P.Z. Meyers is another member of the supposedly non-existent New Atheists, who created what may be the most famous of their defenses for willful ignorance. In what he dubbed the “Courtier’s Reply“, he compares theists to defenders of the emperor’s imaginary clothes (from the famous Hans Christian Anderson story) who complain that one needs to study the intricacies of fashion before insisting that the man is nude.

This all seems rather like intellectual seppuku. It never seems to occur to Meyers (or Dawkins, who quoted the piece approvingly on more than one occasion) that the theists aren’t saying anything like “you don’t know enough about fashion”. We are saying something much more like “that guy’s not the emperor, try the palace”.

But Dawkins is having none of it. He doesn’t need to read books about God, or even listen to the reasons he’s been given why his critiques are completely off the mark, in order to know he’s seen through the great deception. To actually look into the matter before proclaiming intellectual superiority would apparently be as silly as studying “fairyology”.

But the problem isn’t that these two men demand the right to remain ignorant. The problem is that so many listen to them as if they actually knew what they were talking about. Whether or not we choose to call the fans of Dawkins, Meyers, and others “the New Atheists”, they’ve long since abdicated any claim they may have had on being champions of reason.

This entry was posted on Wednesday, April 17th, 2013 at 6:10 am and tagged with apologetics, atheism, Christianity, new atheist, religion, Richard Dawkins and posted in Apologetics, New Atheists. You can follow any responses to this entry through the RSS 2.0 feed.
« Taking a Stand for Relativism
Atheism and the Inability to Think »

38 responses to “The Blindfolded Leading the Blind”