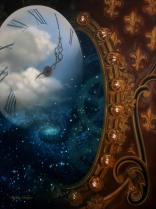 Taking as a starting point that the universe had a cause, I think it is reasonable to wonder whether the cause could itself be timeless. At least, this was one of my questions upon first hearing the Kalam Cosmological Argument.

Though modern science has quite a bit of value to say on the subject, and the current state of cosmology favors a finite age to physical reality, there are deeper reasons to accept a timeless cause of the universe. Whether or not one believes in the multiverse, time (whether our timeline or one “outside” of the universe) simply cannot be infinite in the past.

In considering the topic, I took a look at the philosophical arguments for the finitude of the past. While they didn’t strike me as emotionally impressive (that is, they didn’t “feel true”), I was ultimately forced to conclude that they were sound.

If this is true, there is no point in proposing theories (scientific or otherwise) to defend the logically impossible. These arguments demonstrate that there is no way, even in principle, that there is an infinite series of finite past events (in any timeline).

My favorite of these arguments is actually one that Craig (who has championed the Kalam Cosmological Argument) doesn’t tend to use. It is often called the “Grim Reaper” paradox.

Suppose that there were a man who (since eternity past) has been passed, one at a time, by an infinite number of “Grim Reapers”. Of course, one thinks, the man is long since dead.

Here we’re seeing the paradox. If the man is alive the “next” reaper will kill him, but for every “next”, the one before should have already killed him, so none of them can actually kill him. Still it is a contradiction to say that an infinite string of reapers will just pass him by (leaving him alive).

There is more to be said, but one thing that shouldn’t be said is that this is a silly example, not pertinent to the real world. Most importantly, this is because it is a test for logical consistency (like a mathematical proof), not an empirical experiment. But, even for those who (strangely) insist that logical problems don’t affect reality, there is a crippling issue here.

The passage of time is, itself, like the grim reapers in the examples. If, with every passing moment, there is a positive chance that the universe will be created (by the multiverse–or whatever) and there is an infinite space of time in that region, then the universe should already have been created “earlier”.

As such, there is no actual time in which the universe could have been made.

This breaks down into contradiction, meaning that, whatever else one thinks of the original cause of the first physical objects, there are only two ways out of this.

First is to grant a timeless cause of the universe. And, second, is to claim that the multiverse (or whatever other cause) is itself finite in time–in which case one is back to the same question with it.

So far, so good. But I’ll get to some of the other traits of the universe in future posts.

This entry was posted on Tuesday, May 7th, 2013 at 6:33 am and tagged with apologetics, atheism, Christianity, kalam cosmological argument, Relgion and posted in Apologetics, Cosmological Argument. You can follow any responses to this entry through the RSS 2.0 feed.
« What Else You Got?
Complete Lack of Will »