Theology and Science Aren’t Rivals (In Other News: the Sky is Blue, Water Wet) 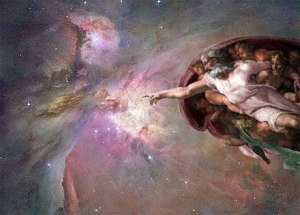 Continuing on with Mackie’s “Miracle of Theism”, we come to the thorny and emotional issue of arguments from design.

Mackie himself opens with Hume’s Dialogues, which contain several lines of argument (nicely summarized by Mackie). The first to be discussed is Hume’s idea that the entire universe cannot be said to be designed, because we cannot check that hypothesis with additional information (as we’ve included the whole of our information in it).

Because he tends to be very fair-minded, Mackie criticizes this argument in that it a scientific hypothesis or theory often goes beyond the available information–and is not useless for that (indeed, many have been put to amazing use). Still, he agrees with the basic formulation on the grounds that “the theistic hypothesis” does not explain why we observe the specific phenomena that we do.

Of course, the main thing to be said here is that it is simply wrong-headed to speak of “the theistic hypothesis” at all. Not only does this assume that there is only one form of theism (a falsehood that atheists are keen to reject in other contexts), but it is simply wrong to say that theism is a hypothesis in the first place.

Those beholden to materialism are constantly in danger of treating every topic as if it were science (save, it seems, when it is their personal views we happen to be discussing). No one dismisses a literary theory, a moral code, or a proposed law on the grounds that it is not a scientific hypothesis–that the results can’t be mathematically modeled or make predictions about the particular phenomena of stories, morals, or laws.

This is because these things are not science. More specifically, it is because they deal with free agents (writers, lawmakers, and so forth), and it is impossible to give a deterministic proof regarding the acts of such agents.

But this is what Mackie is demanding of theism. And it is to grossly misapply standards.

I’m coming to agree with those who maintain that there is a current tendency in philosophers to be consistently over-impressed by Hume. I enjoy his works, and he was clearly brilliant–but his arguments against theism were mostly directed at the easiest targets.

To insist that they had much, if anything, to say about all forms of theism is to deeply misunderstand what theism actually is.

This entry was posted on Sunday, January 12th, 2014 at 2:41 am and tagged with apologetics, atheism, Christianity, Hume, religion, science, Theology and posted in Apologetics, Argument From Science. You can follow any responses to this entry through the RSS 2.0 feed.
« Atheism vs Consciousness
Plug: The Confidence of Jerry Coyne »

44 responses to “Theology and Science Aren’t Rivals (In Other News: the Sky is Blue, Water Wet)”