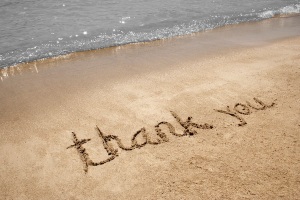 Following up on my earlier post on the moral argument for God’s existence, I wanted to address a tangent that I’m usually forced to let alone for the sake of sticking to the point.  That is, most of the objections to it show a marked confusion about the nature of Christian morality.

That is, if you think that threats of Hell are the basis of Biblical morals, you aren’t talking about Christianity.

One would think that the fact that Christianity is about forgiveness would be well-known enough that “You are good because you’re afraid that God will send you to Hell” would be widely recognized as a terrible argument.

But it is tragic that more people don’t know what the actual motivating force of ethical behavior is within Christianity. Far too many people, even many Christians, are missing out on the brilliance of the idea. So, what is it?

In a word, gratitude.

Christianity, though not necessarily the Christian, recognizes that reward-punishment systems tend to make us either arrogant or terrified, judgmental or guilty. This is a death-trap. Those who think they are good enough tend to be condemning to anyone not living up to their standards, and those who know we could be (and should be) better are very often plagued by self-accusation.

Terrible as it is that so many have fallen into this trap, this is a very big part of what forgiveness was meant to dispel. Forgiveness is meant to drill home to the arrogant person that he didn’t earn any right to claim to be good–and isn’t better than other people–while simultaneously showing the guilty person that she is indeed accepted.

Those who understand, and believe in, this truth will naturally begin to become a better person.

The process is simple, if difficult to live out: the one who knows she has more than she deserves is grateful, and genuinely grateful people do kind things without expecting to get something back, without hoping or demanding that she’ll be rewarded, but just because the thankfulness overflows out of her.

I, for one, believe that gratitude is the core of all human virtue. It is how we can help others without being secretly condescending or selfish. And that is the brilliance of the (actual) Biblical approach to morality.

This entry was posted on Sunday, March 9th, 2014 at 9:41 pm and tagged with apologetics, Christianity, Moral Argument, Morality, religion and posted in Apologetics, Moral Argument. You can follow any responses to this entry through the RSS 2.0 feed.
« Amoral Morality?
Materialists Don’t Believe in Matter »