If I’m Guilty, it’s Your Fault 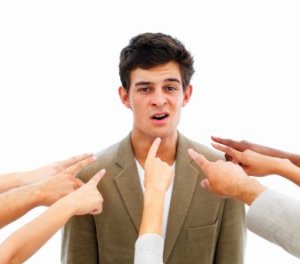 In making a case against theism, Mackie offers a side comment that I think is worth attention–if only because so many keep making it.

That is, Mackie suggests that religions themselves create the very sense of guilt they claim to cure–and that the relief and elation they offer do not adequately compensate for this pain.

As in nearly every case, Mackie merely suggests this, making it unclear whether he’s actually claiming it (without defending the idea) or simply mentioning it in passing. It isn’t until the end of each section, when he often declares that a line of argument is completely defeated, that it becomes clear that he was actually making claims.

But others have been quite a bit more bold in making this accusation of religious traditions, if no more able to make a legitimate case for it.

Of course there are particular religious groups, sects, and leaders that have done this very thing. I don’t know of anyone who denies that guilt has been abused.

But to say that this is somehow universal strikes me as completely strange–and I’ve never seen a legitimate psychological study which supports the idea that religion in general increases feelings of guilt.

In fact, it’s pretty obvious that all thoughtful people realize that we can and should be much better than we are. It only makes sense that our belief systems will reflect this fact.

I suspect that part of the problem here is simple appeal to novelty. The common-sense idea that people aren’t as good as we should be just isn’t as exciting as conspiracy theories about evil Popes wringing their hands in glee over causing pain. But there is, I think, at least one more factor.

We happen to be living in a time where guilt is often scorned as one of the great evils. Like all eras, we make a point to remember those times and places which best illustrate our beliefs. We know all about excesses and abuses of guilt. We seem to almost studiously ignore the fact that a lack of guilt is also very dangerous.

Though it would be healthier to seek a balance here, it is much more in line with the popular narrative to demand that guilt is some unnatural thing foisted upon us by religion. But those who demand evidence before believing a thing should reject that view out of hand.

This entry was posted on Monday, March 31st, 2014 at 10:08 pm and tagged with Christianity, Mackie, Miracle of Theism, philosophy, religion and posted in "Emotional Crutch" Objection, Apologetics, Misunderstanding Theology. You can follow any responses to this entry through the RSS 2.0 feed.
« Only the Worst Positions Allowed
Materialism vs the Mind »