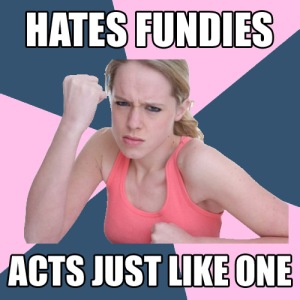 That is, Mackie rightly sees that all the most famous theories on the origins and social function of religion are far too reductionistic to be considered valid. They all seem to assume that, because they can point to a particular effect or use of religion, they have thereby explained all religion.

In pointing out these problems, Mackie makes a rather penetrating observation of Marxism:

“What is more, the characteristic Marxist over-optimism of expecting social conflict and alienation themselves to disappear after a proletarian revolution is itself best understood as a kind of secularized salvationism, the expression of a consoling illusion different, indeed, in specific content but not in general character from the vision of a supernatural ideal realm.”

This caught my attention, not because Marxism is terribly relevant to our current social context, but because similar observations can be made, in any time, of those who are most passionately anti-religious.

The current wave of anti-theists (the New Atheists) can be almost entirely understood as enlightenment-revivalists. Setting aside their lack of concern for what killed the enlightenment in the first place, the logical problems with its propaganda, and the horrific acts it spawned, it is worth noting that the same sort of secular salvationism does seem to have taken hold in this group.

There is a near-constant implication, after all, that the problems of humanity–threats of terrorism, oppression of the poor, lack of education–will be removed or greatly diminished so long as one can rid the world of religion. There is even, if one looks for it, an unspoken assumption that one can count one’s self one of the “brights”, one of the intelligensia, if only one can thoroughly embrace an atheistic way of thinking.

In both cases, we have a secularized salvationism–the first being social, and the second a matter of personal value and identity. This is not unlike the religious claim that devotion to God is beneficial to society and empowering to the individual.

Essentially, the emotional issues traditionally addressed by the world’s great religions are fundamental questions of the human condition. These needs cannot be removed from one’s nature simply by rejecting particular answers to them, or eschewing the trappings of religion.

A thoughtful approach, therefore, will not simply replace one consoling illusion for another–say, dogmatic religion for dogmatic atheism–but by taking an altogether more nuanced view of both these questions and the answers presented by the world’s great religions.

And that is where one must start (and where far too many refuse to start): asking these basic questions and examining the options available.

When one does this, the foibles, and sheer uselessness, of blunt materialism become much more obvious.

This entry was posted on Monday, April 7th, 2014 at 10:44 pm and tagged with apologetics, Christianity, Mackie, philosophy, religion, Secularism and posted in Apologetics, Problems With Materialism. You can follow any responses to this entry through the RSS 2.0 feed.
« Materialism vs the Mind
Co-opting Science Shows a Lack of Respect »