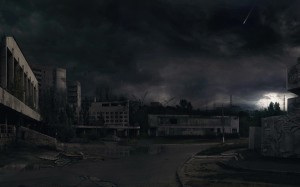 I don’t usually agree with the philosophy I hear out of the atheist novelist Terry Pratchett.

I agree with this:

Rincewind stared, and knew that there were far worse things than Evil. All the demons in Hell would torture your very soul, but that was precisely because they valued souls very highly; evil would always try to steal the universe, but at least it considered the universe worth stealing. But the gray world behind those empty eyes would trample and destroy without even according its victims the dignity of hatred. It wouldn’t even notice them. (The Light Fantastic, p. 256)

On a Christian view, this is the core of all evil–nothingness, the tearing apart of reality, the end of things. And, given naturalism, this is exactly what all things will become, and what much of what we care about already is. The forces, not of evil in the fairy-tale sense, but of unthinking indifference will rip us apart, and rip apart everything we’ve ever known.

Not that I think most naturalists view life this way, and that is my point. Most prefer to avoid the topic of our ultimate fate, proposing instead that we focus on more short term thinking. I have to say that, like most philosophers, I find it hard to accept a position that answers fundamental questions with a kind of denial. It seems both more honest, and more courageous, to face them squarely.

Years ago, I found myself unable to turn away. In fact, I’d be hard pressed to name a piece of writing that reminds me so much of the last months before I became a Christian than the paragraph quoted here. At that time, even more than now, I would have been appalled at the pleasant glosses being put on naturalism. In fact, I was appalled when I was first accused of raising the subject disingenuously–as if the years I spent horrified by this prospect hadn’t actually happened.

But none of this is to say that naturalism isn’t true. It may well be that everything and everyone we’ve ever loved is being slowly destroyed by something that can’t understand the value of life and won’t remember us once we’re gone. But only a failure to face up to the reality of the situation, to stare into the darkness without blinking, could lead one to think that naturalism is anything but bleak.