There are no natural rights— rights one has just by virtue of being human. (The Atheist’s Guide to Reality, p. 288)

This runs very counter to what most people believe, but, given atheism, it seems very hard to deny. After all, the materialism which is the basis of nearly all modern atheism denies the reality of any moral truth or value.

Most atheists I know would agree with this, but would emphasize that a person need not believe in moral truth in order to be a nice person. One can claim that morality is simply culturally relative, biologically advantageous, or otherwise subjective, and still be a good person.

This seems true enough, but is a side issue. Whatever I may think of a particular atheist, or even the impact of atheism on social health, the question is over truth. Is it more likely that humans have rights, or that God does not exist? Personally, I think most of us wouldn’t be confident enough of God’s non-existence to accept the idea that people don’t have rights beyond what governments happen to give them. Rather, I think we would say that a government which enslaves its people, or slaughters a racial minority, is in the wrong.

But this does make materialism seem rather arbitrary. It would be rather tidy if we could dismiss all knowledge that isn’t as easily reduced to mathematics as the material. But, setting aside the convenience of it, and the rhetorical value of being “scientific”, I don’t see any reason to think that it is true.

Rejecting a basic fact of human experience as illusory requires a reason that is more palpably true than the experience itself. This could be done in theory, but no one has yet to offer a reason to believe in materialism (or in atheism) that is as obviously true as the fact that it is wrong to torture innocent people. 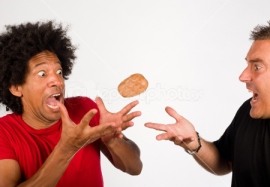 Yesterday, I wrote about Rosenberg’s commitment to genetic determinism. I think it is a fitting followup to write about his claim that, while people are “programmed” to have the same morals regardless of what we think, that people aren’t programmed to make the same mistakes.

At least, that is what he seems to be saying.

In trying to defend the idea that all humans are programmed to be good (and therefore don’t need to believe things about morals to be good), he addresses the rather obvious objection that we seem to commit so much evil:

Where most Nazis “went wrong” was in the idiotic beliefs about race and a lot of other things they combined with core morality, resulting in a catastrophe for their victims and for Germany. (“The Atheist’s Guide to Reality”, pp. 143-144).

That is, the Nazis shared our basic morals, they merely had bad science (in embracing racial eugenics).

This statement is far more controversial than its proponents insinuate. The fact that eugenics is making a comeback in academia is proof enough of that. But, if one needs more, a real look at the Nazis’ beliefs will show something very different from current moral convictions.

But the more obvious problem is the fact that Rosenberg gives no attention at all to what “idiotic beliefs” might be blinding the current generation–or future ones.

The racial darwinism of the Nazis was supported by respected scientists and philosophers of the time, but Rosenberg gives us no reason to think a similar thing couldn’t happen again. Is there any reason at all to think that we “programmed” humans aren’t going to fall victim to the same insanity if we accept some “bad science”.

As prime suspect number one in the case of bad science, I’d present Rosenberg’s own darwinistic nihilism. That seems as dangerous a pseudoscience as any.

But, in the event that his own bad science brought about something terrible, Rosenberg may well ask us to remember this about the Nazis:

But these decisions should not be misrepresented as scientific ones. Science is always neutral on what we should do. In these cases, as elsewhere, it’s core morality that does the deciding. (ibid, p. 290)

So, we can trust that we will behave well because we all have “core morality” programmed into us. Of course, it doesn’t work if we accept a piece of bad science. But, really, that is the core morality’s fault, nothing to do with science.

I’m genuinely confused as to why Rosenberg seems to think I should find this comforting.

At this point, it seems that Rosenberg needs either to bite the bullet and admit that his “nice nihilism” is simply “nihilism” or (as I would prefer) to consider that he might have been wrong to say that thoughts and morality are illusory. After all, these are as basic to human life as any other perception.

But that, of course, would lead him to reject his materialism.

Materialist Alex Rosenberg is convinced that a society full of nihilists would get along as well as any other.

By the same token, adopting nihilism as it applies to morality is not going to have any impact on anyone’s conduct. Including ours. (“The Atheist’s Guide to Reality”, p. 96)

He claims because all people have the same moral “programming” due to evolutionary pressures, it, therefore, doesn’t matter what one actually believes.

I expect that even the most passionate of evolutionary psychologists is bound to hesitate here. Surely, not every single thought in our heads is simply dictated to us by our physiology, completely apart from our professed beliefs?

But the materialist might have a hard time arguing against Rosenberg. As he discusses in his book, a consistent materialist should reject the idea that thoughts or beliefs exist at all. And it is certainly hard to argue that non-existent things affect behavior.

I’ve discussed some of the problems with this already. But part of what is going on here, I think, is that Rosenberg and others seem to dismiss the power of cultural pressures. This might seem an odd thing to say about a group that makes frequent use of the word “indoctrination”, but many of them don’t seem to be aware that the same force works equally well in secular circles.

What does this have to do with morality? Social pressure does a lot to influence people, even moral nihilists. This being the case, it simply does not follow that, because there is a small minority of well behaved nihilists in a culture, that a culture filled with them would not decline in their moral standing.

Because Rosenberg is so focused on the physical, he fails to note, let alone answer, this argument. Yet it is the primary concern about the growth of moral nihilism in modern culture.

Of course, none of this is to say that nihilism is untrue. It may well be that morality is a fiction (though I’ll be arguing otherwise in the future). Even then, a nihilism that finds so much time for moral indignation at religious believers seems something of a contradiction.

And that may be Rosenberg’s biggest issue. He can’t seem to give anyone either an intellectual or a moral reason to accept the scientism he so fervently pushes.

In fact, the view leads him to reject the existence of both thought and morality.

Our God: the Nothing 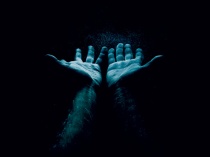 David Bentley Hart, in his essay “Christ and Nothing”, offers an eloquent condemnation of the modern idolatry of the unconstrained will which chooses morals according to preference:

It seems to me much easier to convince a man that he is in thrall to demons and offer him manumission than to convince him that he is a slave to himself and prisoner to his own will. Here is a god more elusive, protean, and indomitable than either Apollo or Dionysus; and whether he manifests himself in some demonic titanism of the will, like the mass delirium of the Third Reich, or simply in the mesmeric banality of consumer culture, his throne has been set in the very hearts of those he enslaves. And it is this god, I think, against whom the First Commandment calls us now to struggle.

If you aren’t familiar with Hart, I encourage you to take a look at the full article. It takes a few sittings to get through, but is a brilliant commentary on modernism as a reaction to Christianity.