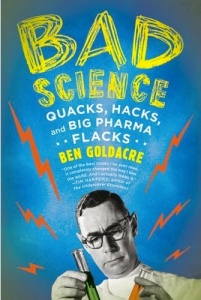 If that seems obvious, I can only say that there are many who still need to be told. It continues to strike me as incredible that so many people, who claim to be committed to a tough-minded scientific approach, can become so enamored with the idea that this unsupported (and blatantly incoherent) philosophy is the true spirit of scientific thought.

But what is particularly shocking is how often this kind of pseudoscience is promoted by scientists themselves. Richard Dawkins is, of course, the most obvious example, but there are others.

Still, as professor of the public understanding of the sciences, it was (specifically) Dawkins job to clear up muddles like this–rather than exacerbate the problem. The fact that he spent his career arguing for ‘scientific thought’ that was completely unsupported by any kind of scientific evidence did not help.

If Dawkins had understood this, perhaps scientism wouldn’t be running quite so rampant in modern culture. It rears its (vacuous) head every time someone demands physical evidence for a logical principle–or insists that materialism is true on the grounds of (completely arbitrarily) declaring that magic is the only other option.

One of the more popular incarnations is the appeal to the history of science. “We’ve never found any evidence for the non-natural” or so the phrase goes. I suppose there are dozens of responses to that, but the pertinent one is that absence of evidence is only significant if someone has actually looked for evidence at some point.

And there simply has never been a scientific experiment that tested for transcendence. To claim otherwise, or to claim that science shows things without testing for them is at least pseudoscience, if not downright superstition.

Yet this is exactly the kind of thinking being promoted by people who loudly claim to be the true champions of science. An actual understanding of science would be more careful about logical distinctions, slower to extrapolate philosophical conclusions from small amounts of data, and in general have a better grasp of what questions science is relevant to answer.

We see none of this in the New Atheists, and I find it astonishing that they haven’t been asked for evidence for their claims far more often.