Missing a Target as Big as God 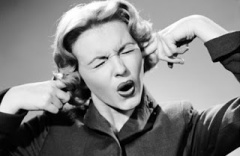 After (erroneously) insisting that science vindicates atheism, Bertrand Russell goes on to rally his troops for a strike against a strange vision of Christian despotism:

Science can help us to get over this craven fear in which mankind has lived for so many generations. Science can teach us, and I think our own hearts can teach us, no longer to look around for imaginary supports, no longer to invent allies in the sky, but rather to look to our own efforts here below to make this world a better place to live in, instead of the sort of place that the churches in all these centuries have made it.

This is the sort of statement that could easily have been lifted from a communist propaganda pamphlet. There is a form of science-worship going on here, where technology will save us from all the problems of the world. At this point in history, it shouldn’t be necessary to argue that it is human nature, and not belief in God, that is the source of these problems.

But, apparently it is necessary. And that so many are eager to ignore lessons which cost more than a hundred million lives is, at best, deeply tragic.

This is at least partially because neither Russell nor the New Atheists can envision God as anything more than an “ally in the sky”. They seem oblivious to the fact that the entire concept of classical theism, of transcendence, or the metaphysical concept of pure actuality are completely beyond their objections. Consequently, they seem to think that they need only argue that there is no bearded man floating through the physical cosmos in order to refute Christianity.

That is roughly on par with claiming that all one needs to do to disprove atheism is to show that a kindergartener’s understanding of Richard Dawkins is silly.

We can’t find test for God’s presence with science any more than Hamlet can find Shakespeare by looking into a telescope. Simply demanding that naturalism is true, and therefore all propositions (including God) can be investigated with science, is simply arrogant dogmatism.

This should be obvious to anyone willing to listen to theologians, but Dawkins and others have spilled a fair amount of ink arguing that they don’t need to understand theology in order to reject belief in (what they think of as) God.

And the white-knuckled grip that many from this group keep on their own ignorance can’t be called anything other than prejudice.