Russell XVII: The Joy of (Mis)Reading 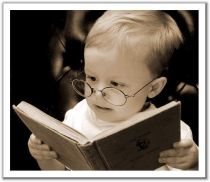 Now turning to what he finds objectionable about Christ’s teachings, Russell starts with what he considers to be an obvious inaccuracy:

For one thing, he certainly thought that His second coming would occur in clouds of glory before the death of all the people who were living at that time. There are a great many texts that prove that.

This is an old debate. As far as I know, it centers mostly around whether or not the word “come” in one particular verse describes Christ’s final return before the end of the world, or the coming of the spirit at the Pentecost. It takes very little study, however, to see that “great many” and “prove” are clearly overstatements.

I’ll not add more, because choosing between the resolutions of this issue seems a minor point for those who accept Christianity as true. It is not a major objection to Christ’s teachings as a whole.

What is more relevant is that Russell uses the following as one of his main supports for the point:

When [Christ] said, “Take no thought for the morrow,” and things of that sort, it was very largely because He thought that the second coming was going to be very soon, and that all ordinary mundane affairs did not count.

One wonders how Russell knows this is why Christ said these things. Surely, as a sage, it is not out of the question that he felt people were too worried about personal daily affairs? Is the idea that he thought the world was ending when he said “tomorrow will worry about itself” really the only possible explanation?

Russell seems to think so. In fact, he adds this:

The early Christians did really believe it, and they did abstain from such things as planting trees in their gardens, because they did accept from Christ the belief that the second coming was imminent.

I don’t know where Russell has gotten the idea that the early Christians refrained from planting trees, nor am I sure why he feels he can extrapolate from this that Christ had committed himself to a specific time-frame.

This is yet another point at which I am reminded of the New Atheists, who often demand, without support, that their own strange interpretations of the Bible are correct. Of course, if one simply takes full license to completely re-interpret a view, it is easy to “refute” it, but I doubt that the New Atheists would submit to others taking this approach to their own writings.

This entry was posted on Thursday, February 21st, 2013 at 6:53 am and tagged with apologetics, Bertrand Russell, Bible, Exegesis, New Atheists and posted in Apologetics, Reliability of the Bible, Theology. You can follow any responses to this entry through the RSS 2.0 feed.
« Russell XVI: Evidence has Left the Building
Russell XVIII: The Human Self-Destruct Button »

5 responses to “Russell XVII: The Joy of (Mis)Reading”